Editor’s Note: The results of the WorkKeys® examinations – by state, school, and district – are available on the SC Department of Education website. The embargo was lifted at 9 a.m. on Monday, October 9.

Columbia – Today, the South Carolina Department of Education (SCDE) released results of the administration of the WorkKeys®, a career readiness exam to 11th grade students. This was the third year all students in 11th grade were required to take the exam, along with The ACT, a college readiness exam. Statewide results for WorkKeys® are down from both 2015 and 2016.

Results from the WorkKeys® exam indicate a student’s readiness for foundational workplace skills, and many employers use the results to choose qualified job applicants for open positions. Students were required to take three ACT WorkKeys® tests: Applied Mathematics, Locating Information, and Reading for Information. Statewide, 61 percent of 11th grade students earned a Silver, Gold, or Platinum National Career Readiness Certificate (NCRC) on WorkKeys®. A score of Silver or Better was adopted by the Education Oversight Committee (EOC) last month as one measure of a career-ready students in high school. According to ACT, students earning a least a Silver certificate have the necessary foundational skills for over 60 percent of the profiled jobs in their occupational database. Twenty-three percent of 11th grade students earned a Bronze NCRC.

Neil Robinson, Jr., EOC Chairman, emphasized the importance of providing students with a portable, evidence-based credential like the NCRC.

“I encourage students who don’t score a Silver certificate to use their senior year to try again,” Robinson stated. “A career is always the overall goal, even if a student intends to go to college first.”

School districts are encouraged to provide remediation to students and re-assess with WorkKeys® prior to graduation.

Neil Robinson, Jr., EOC Chairman, said it is interesting to note that the school districts where a higher percentage of students earned a Silver or better are also in the areas of the state which are experiencing the highest rate of job and population growth. Many large companies have announced new operations or expansions in the Lowcountry and the Upstate areas of South Carolina. According to a U.S. Census Bureau report released in May 2017, Greenville (Greenville-Anderson-Mauldin) is the fourth-fastest-growing city in the nation, growing by 5.8% annually.

Additionally, according to information collected by the Charleston Regional Development Alliance and the US Census Bureau, as of March 2017, 34 people per day are moving to the Trident Lowcountry area of South Carolina. If births are included, the number increases to 45 new people per day. 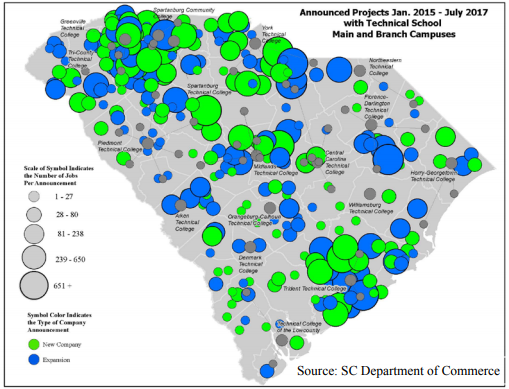 The table below shows the percentage of students in school districts that earned a Silver, Gold or Platinum National Career Readiness Certificate.