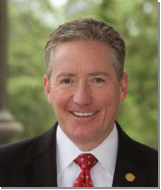 Columbia – Senator Greg Hembree has been appointed to serve as the newest member of the SC Education Oversight Committee (EOC). Hembree, who represents thecitizens of Horry and Dillon Counties in Senate District 28, has replaced Sen. Wes Hayes on the EOC. He serves as the designee of Senate Education Chairman John Courson.

Hembree was elected to represent Senate District 28 in November 2012 with 67 percent of the vote and was re-elected in 2016. Prior to his election to the South Carolina Senate, he served 14 years as Solicitor for Horry and Georgetown Counties. He was first elected Solicitor in 1998.

Hembree and his wife Renee have three children, two sons-in-law, and one grandson; live in Little River, South Carolina; and are active members of Ocean Drive Presbyterian Church.